After the success of the XP 16 K 7m, I was ready for the new challenge, first I was thinking about a 2 liter engine but I first will try the K 4m 1600 16 v engine.   After I said goodbye to the Renault ECU, and I found out that the distributor and intake from a Clio fits, the k7m 1600 project  was a peace of cake.

The 16 V is a different story, to convert this engine to carburetor and distribution ignition, nothing from previous Renaults fits and all has to be new designed , build and tested.

There are two options. Make an adapter direct to the head that fits a 32 dir Weber or Solex from a 1700 engine, or make a Stromberg fits to the throttle mounting point of the existing manifold. Both options are open now, but I prefer the Stromberg position. 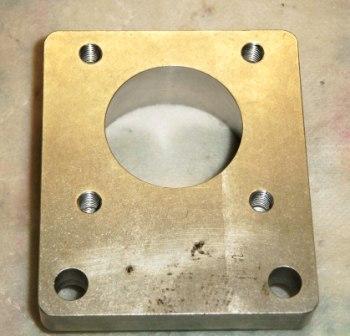 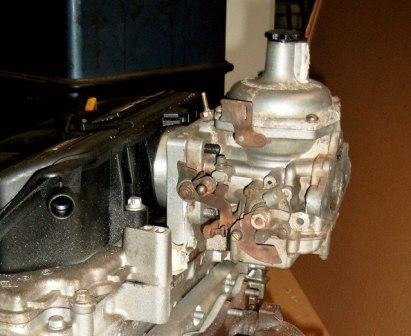 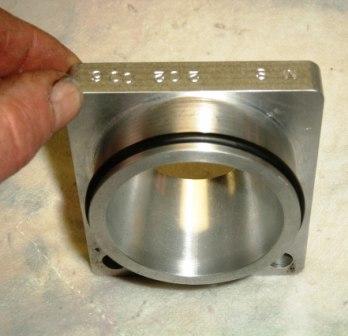 First I was curious if this type of engine will run on conventional ignition ?  which spot was the best for the distributor, and what was the easiest way to do ? The easiest way was the cap in the front cover. So I made this first  only for testing and the engine ran. As final spot it was reject , no room. At the back of the head there is more room, but more thinking was needed. To keep it simple I made a small fixing ring for the cap and an adjustable shaft in the cam for the rotor, this design makes it easy to get the rotor in the right ignition position. 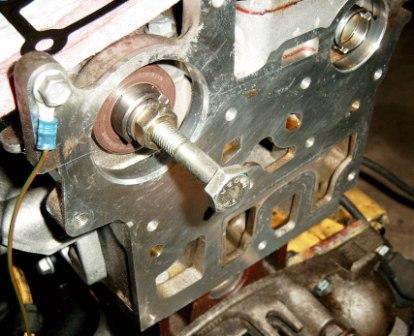 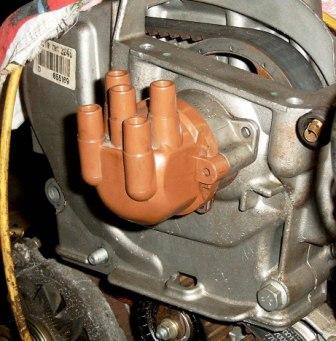 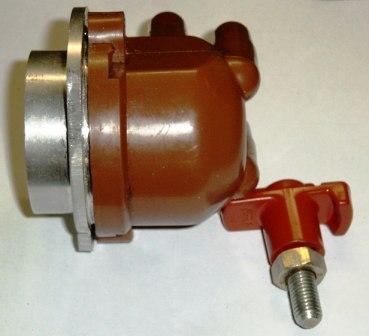 The exhaust manifold that comes with the engine, is too heavy, and also too close to the block and no room for the starter and   alternator.

There are two options to solve the problem, make a new spaghetti  or try to find out if something from another car brand will fit. Soon I found out that the spaghetti from a 1991 Mazda 323 F 16 v has the perfect match to the  square exhaust gates, only an  attachment adapter has to be made for fixing. 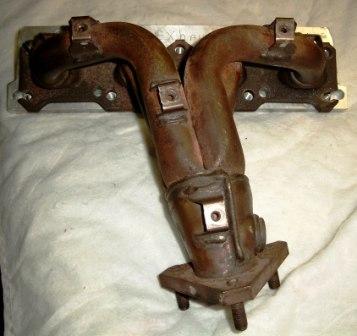 That was also the biggest problem I had to solve for the K7m engine, Had to designed a  complete new thermostat part. For this engine it also is a complicated   matter. If there is enough room it's no problem, but that damned steering gear is so close to the head and also we have again water and oil channels too her. The first try was an aluminum 20 mm thick cover with channels made in it, but no room and how to go further with the water channel. The idea now is to freeze the channels in the head and use a 6 mm thick steal cover plate with a weld on tube for the water supply with a thermostat in the hose design on top of that tube. But after I thought it over that idea was to complicated and risky for water leaks. I designed a new aluminum back cover for the hot water return to the thermostat, when this part is ready for mounting, I will thinking how to get further with the thermostat and return hose to the radiator. 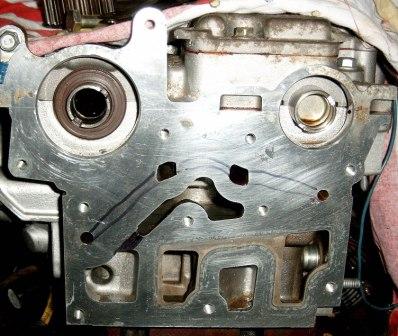 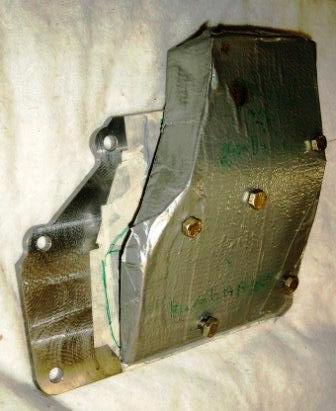 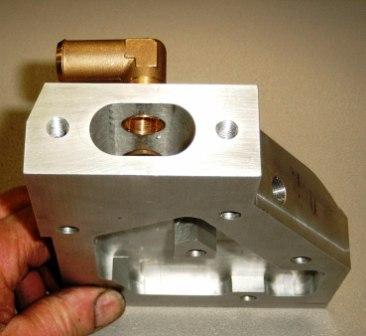 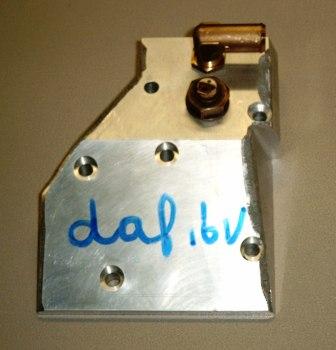 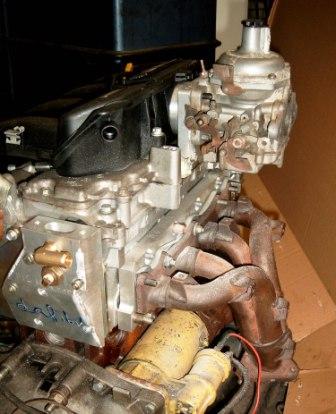 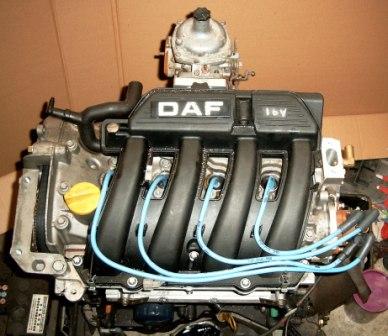 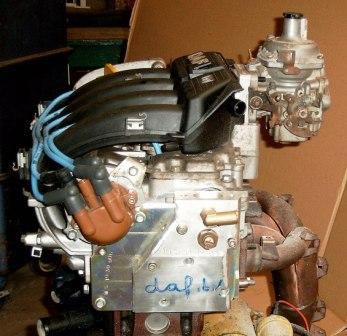 I have the engine in and ready for a test drive. 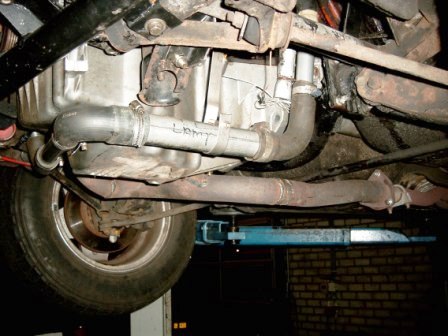 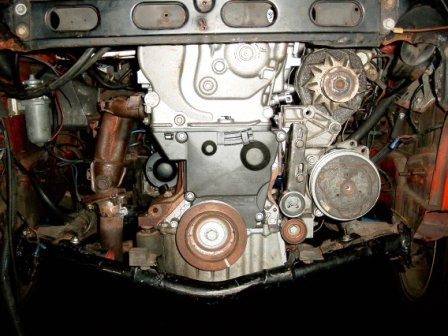 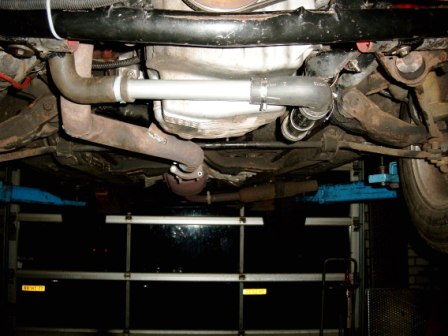 More work than I had expected, special the steering rods had to be modified. That steering gear always was a problem. 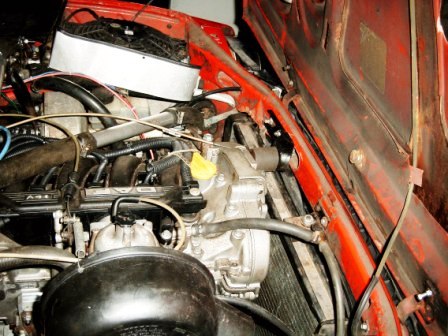 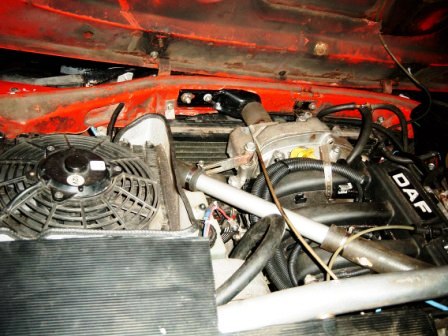 The engine feels good and has much potence but the ignition needs more attention, no timing marks and no records about timing and  timing vacuum data so I have to find out the correct adjustments.