Shift to Daf and you will never shift again

He stayed with Datsun 1200s until 1973 when that manufacturer stopped shipping them.

So he had to took around for another vehicle, he converted a Ford Pinto, but then settled on the Dutch DAF. 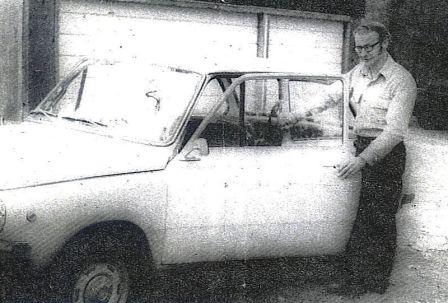 In 1975 he imported 10 Dafs  type 44 for $ piece from Garage de Burgh in Eindhoven  Holland those under a two year import exemption from the federal government followed by a second shipment in 1977 this time 14 Dafs type 46. For electric conversion he removed the 2 cylinder flat twin petrol engine, which were sold to speed boat builders. He also removed the fuel tank and exhaust system. Installed an 42 volt electric motor 16 six volt batteries and reinforced the front and rear springs to carry the heavy load off the batteries.

Since then he has been working on Renault Le Car  until he stopped his business in  ????.