July 1960, DAF  has ended the association with Milton Kaufman, who had earlier been appointed distributor for the Dutch automobiles. Instead of a wholly-owned subsidiary EASTERN CARS of HOLLAND was established.  With 69 dealerships along the Atlantic seaboard and inland  to Chicago.  President of the subsidiary is MR. Jan Soeten. Also two service experts  arrived  from the Netherlands, one of them  Gerard Verleg.

In 1964 Eastern Cars of Holland has been closed,  FERGUSON AUTOMOTIVE of Long Island, a multi marque distributor took it over till end of 1966. The organization was reduced to 25 dealers extending from Massachusetts to South Carolina to Iowa, plus one in Los Angles.  New legislations  came to effect in 1967,  and it was too expensive to  modified the DAF's  the 33 and 44's to get them  past for all these tests' The NEW  DAF 66 with the dion rear axle ,launched in 1973,  was specially designed to made a come back to the US market. But the oil crisis dropped all those planes.

The Dutch took the clutch out of the compact 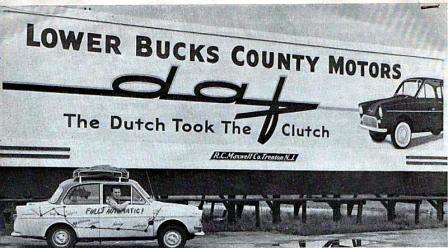 Wim Dussel, the world traveler in front of a big billboard  Trenton NJ  1963

Just before the new safety legislations, 1967, Jan Soeten imported  on personal title 6 DAF's 44 from Porto Rico to get these cars licensed. All 6 were sold very quickly to  former DAF 600/750 owners. 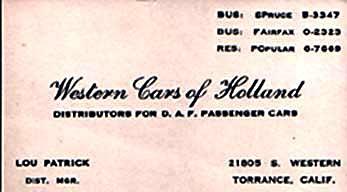 With special thanks to Bill Radtke. 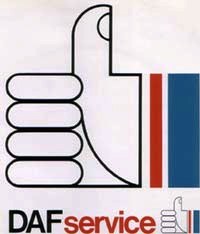